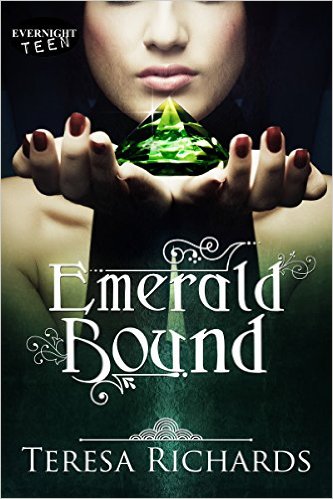 A princess, a pea, and a tower of mattresses. This is the sliver that survives of a story more nightmare than fairytale...

Maggie Rhodes, high school junior and semi-reformed stalker, learns the tale’s true roots after a spying attempt goes awry and her best friend Kate ends up as the victim of an ancient curse. At the center of the curse lies an enchanted emerald that has been residing quietly in a museum for the past fifty years.

Admirers of the gem have no idea that it feeds on life. Or that it’s found its next victim in Kate. Enter Lindy, a school acquaintance who knows more than she’s letting on, and Garon, a handsome stranger claiming he knows how to help, and Maggie is left wondering who to trust and how to save her best friend before it’s too late.

If only Maggie knew her connection to the fairy tale was rooted far deeper than an endangered best friend.

I love retellings. So when I read the description of Emerald Bound, I just had to read it. It doesn't have a lot in common with the original fairy tale, The Pincess and the Pea, but I still enjoyed it for what it was and to be honest, it exceeded my expectations.

Maggie's best friend disappear after they spent a night at Marshal's after being caught spying on him. Nobody remembers Kate except for Maggie. So of course (there wouldn't be a story otherwise) she tries to bring her friend back and discover what is the secret behind the mysterious Parker family.

We follow two perspectives : Maggie's and Lindy's (Marshal's sister). I loved both of them but Lindy's my favourite. I loved reading about her story and how it all started.

Then, there is Maggie. The girl who, in the middle of a quest, manages to think about SAT words. She's a great main character : Brave with just enough wit. She brings humor in a serious and complicated situation and I found myself smiling multiple times. It is refreshing to see a teenager actually act like one. This doesn't mean she's whiny or immature. She gets overwhelmed and sometimes she doesn't know how to handle things, which is completely normal when magic things happen.

There is something addictive in the writing : The descriptions were so vivid I could easily imagine everything and I think it would be a great movie too. It's like the pages turn themselves, it is so easy to read. I would have like for other characters to be more present and there were some annoying repetitions but other than that, it was a pretty good read. I hadn't heard of this one before! I also adore retellings and I've never read a retelling of Princess and the Pea so it sounds rather interesting. REVIEW : A Torch Against The Night by Sabaa Tahir

REVIEW : This is Where it Ends by Marieke Nijkamp